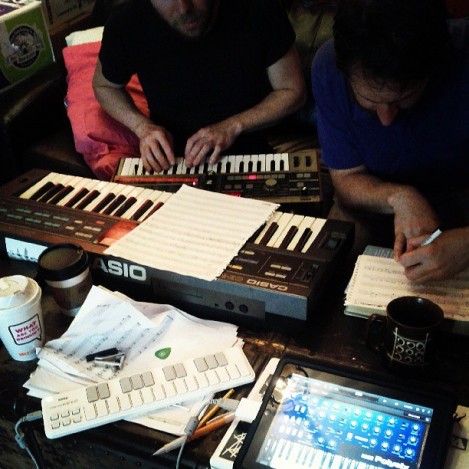 Try to imagine a research funding application from Arnold Schoenberg. Research question: ‘can I make music in which all pitch classes are played equally often?’. In his article ‘Composition is not Research’ John Croft challenges a conception and ideal of compositional work in academia (download the PDF article).

The incongruity between the act of composition and the way we are required to portray it has not gone unremarked: the advice you’ll receive from a seasoned composer-academic is simply to make up some nonsense to get the money, and then forget the nonsense and write the piece you wanted to write in the first place. The problem with this is not just that funding goes to those most adept at writing nonsense, but that it is hard to avoid at least a passing resemblance between what one says one will do and what one eventually does. If, in order to get some funding, I say that I’m going to write a piece about ‘sustainability’, converting arctic ice cap data into sound files to be manipulated in real time in an internet-mediated free-improvisation event combining live programming, video projection, and social media, and if I get the money and then just compose the ensemble piece I wanted to write in the first place, questions will surely be asked.

John Croft’s article has generated a good deal of discussion on blogs and social media since its appearance (Tempo, 69/272, April 2015), some of which has been markedly hostile. The January 2016 issue of Tempo will feature two articles in response, one by composer Camden Reeves, the other by City Head of Performance Ian Pace, entitled ‘Composition and Performance can be, and often have been, Research’ (download the PDF article).

On November 25th, 2015, at 17:30, a special Research Forum will take place at City University’s Department of Music, London. A group of panellists will lead a discussion on current debates about the relationship between practice and research.

John Croft, ‘Composition is not Research’.

Ian Pace, ‘Composition and Performance can be, and often have been, Research’.

6 responses to ““Can Composition and Performance be Research?” Forum, November 25th, London”